What’s the first thing that comes to your mind when you think of police? Is it arguably the worlds’ most famous police force, the N.Y.P.D? Or is it a blue uniform? 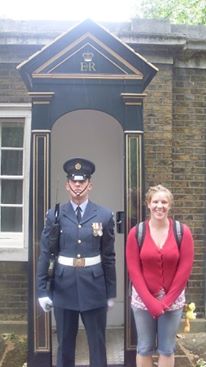 Guards in London Outside Buckingham Palace in 2008

With Chiliean Police Force in 2016

With the NYPD in 2008! Please excuse the bad outfit!

I was very lucky to get a last minute ticket to Real Living’s interior design series in Melbourne last year. A friend is in design school, and I love doing anything at all that is different to what I usually do (apart from cleaning, haha!). So I shimmied along, and one of the presenters talked about colour psychology in creating interior design spaces.

According to the presenter, the reason why blue is chosen as a police uniform is because blue is the colour of stability and it is designed as a social cue, or control.  White lets your eyes have rest – a theory as to why hospitals have white paint, and red is the colour of passion and action. Green is supposed to be calming, and workers in disability and dementia fields use a lot of green colours in sensory therapy, including gardens. Black is seen as power and darkness.

According to policeone, the first police uniform came from the first modern police force – the Bobbies of London. In 1829, the first Bobbies were issued a dark blue uniform, to distinguish them from the British military who wore red and white uniforms at the time.

The first official police force in the United States was established in the city of New York in 1845, and used dark blue uniforms which were surplus from the Civil War. Based on the London police, the New York City Police Department adopted the dark blue uniform in 1853, with other American State following suit, including. Commonwealth Countries such as Australia, New Zealand and Canada. Other countries such as Chile, have a green police uniform. This comes from their links to the military.

What does this mean for police officers?

This can mean increased safety, based on people’s feelings about police officers. When a person wears a police uniform, people are able to ask them for help (I’ve seen this many times when walking with a police officer while working with Victoria Police- you had to leave an extra 15 minutes beforehand if you were walking anywhere as people always asked for assistance), and are generally more cooperative to requests. The presence of a police officer is also usually means less crime – people are less likely to commit an offence when a police officer is present.

What does this mean for the public?

Visible police patrolling assists in reducing crime and anti-social behaviour happening in in an area. To be most effective, the patrolling needs to occur at a time and place when the bahviour that you want stopped is occurring. Therefore seeing police can be a good thing as it helps reduce the likelihood of crime. Don’t forget to check out the uniform when you see your next police officer!

Click here for more fantastic photo collection of police officers around the world.