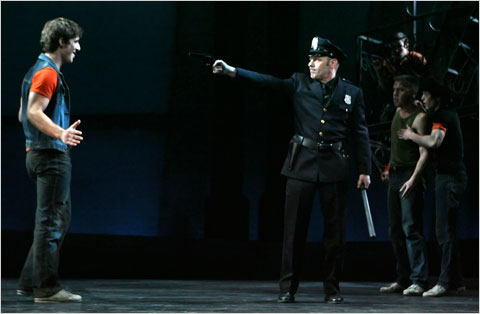 I was in the car yesterday, and ‘Gee Officer Krupke’ from West Side Story started playing on my car stereo. It’s a brilliant song about Juvenile Delinquency – sums up the whole theory around what causes JD in a very tidy time of approximately 4 minutes.

At the start of the song, Action, the leader of the gang, the Jets, says “They [the police] believe everything they read about us cruddy JDs [juvenile delinquents]. So that’s what we give ’em; something to believe in.”

This quote really highlights a famous study that by treating people a certain way, they’ll behave that way.

Here’s the video to the song:

As a term, Juvenile Delinquency refers to young people, aged up to 25, who participate in illegal activity.  There are lots of theories as to how and why juvenile delinquency occurs – a quick Google will send you in the right direction if you are looking to learn a little bit more.

‘Gee Officer Krupke’ reminds me of a famous study of Juvenile Delinquency by William Chambliss, called the ‘Saints and the Roughnecks’. The study talks Juvenile Delinquency as a self -fulfilling prophecy. People viewed the gang the Roughnecks as JDs, and were treated as such. However, this study also talked about another gang, called the Saints. While the Saints were more delinquent, this gang were from middle to upper class families, whereas the Roughnecks were from lower class families.

The Roughnecks were repeatedly stopped by police, and threatened with loitering when doing nothing wrong, whereas the Saints only had positive interactions with the police, even if they were caught breaking the law. As they were seen as ‘good boys’, the police never even took them to the police station. The Roughnecks by contrast were arrested repeatedly with members spending the night in jail.

The author of the study attributes this partially ‘we’ll see what we want to see’, to the money the Saints had meant that they could access cars, and the Roughnecks couldn’t. This meant that the Roughnecks were much more visible to the local community, whereas the Saints would drive out of town to offend, resulting in them not being caught by people who knew them. However, the nature and average cost of their offering was incredibly similar, meaning that prejudice disadvantaged the Roughnecks considerably.

In my own work, I remember interviewing some detectives for research on a youth intervention program. Every single one talked about how while 50% were the poor kids they were taught about at the academy, (the police academy teaches how poor life circumstances can lead to offending), they talked about the 50% from very well off homes, who had no boundaries, and were the focus of significant theft charges. The police all talked about how most of the parents used to say ‘you can deal with them’, and wouldn’t even attend the station to support them in police interviews, forcing the police to call a volunteer to attend. These kids were reportedly more likely to have fewer charges as they could afford good lawyers.

Long term, the Saints were better off. The Roughnecks had a couple of successful members, however one ended up in prison for murder. Food for thought.